Back in August, I took a social media hiatus thinking my kid needed me. But actually, I end up needing it for myself. The kid was getting bullied in his preschool’s summer camp, and I suspected him being the only brown kid in class may have put a target on his back. He handled the situation pretty well by staying cool and reporting what happened to me. I brought it up with the teacher and program director, and no other incidents followed.
Coincidentally, we put our (embarrassingly) nth offer on a house which got accepted soon after. We would be moving to a different school district, and we could have a fresh start, him with the school and me with the weight of the past months from feeling cramped by a home that couldn’t accommodate extended family once the pandemic travel restrictions get lifted. Or at least, what remained of my family. For those who don’t know, I lost my mother to COVID-19 in May but that’s another monster of a story, which I’ve written poems and journal entries for but as for piecing the whole thing together, I’m still not ready.
However, the accepted home offer fell through because another buyer sneaked in. And I cried my heart out on that cape cod with the lovely front yard landscape. Only when we lost that house did I know how badly I wanted one, and I fell into a blackhole believing we would never own a house, not just in this cutthroat seller’s market but maybe ever.

In September, my kid started kindergarten. Taking pictures of him starting school and seeing him come home excited with whatever artwork or assignment was somewhat uplifting. Perhaps the most comforting news aside from the bullies attending kindergarten at a different town was that our kid was making friends. My husband enrolled him in Judo classes, and at first, the kid hesitated but after a few weeks, he warmed up to the mat.
Meanwhile, my husband and I kept looking for houses but my heart was no longer in it. I just didn’t want to be disappointed again. Around the same time, I was seeing different providers for compounded concerns on my physical health. Aside from my receiving an ultimatum from doctors to change my lifestyle—mentally and creatively, I haven’t been in a good place. Here and there, I revised pieces of my first manuscript after consolidating feedback from my submissions. But more often, I was stuck. Like the ideas were trapped in my head and somewhere between my brain and the page was this huge blockage. I couldn’t write continuously to save my life.
Then, after sitting on a design my sister had made about my mother’s time of death, I got my first tattoo. 1:43, which also means ‘I love you’ or at least, that’s what I’ve been telling myself to feel better. My mother’s final message was etched on my skin on September 21st. 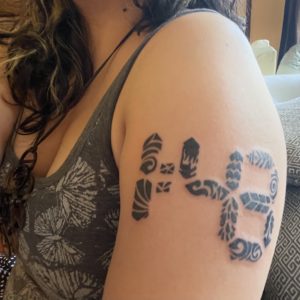 My mother had wanted our family to be together, but after my son was born, she and I began growing apart. Following her passing, I haven’t stopped regretting it. I haven’t stopped wishing I could honor her wish and bring the family together. Strange enough, before September ended, we put yet another offer on a house. It got accepted and passed Attorney Review. Call it cosmic or divine intervention. Things were finally looking up.

October was pretty much a blur. My husband and I celebrated our eleventh anniversary, we attended a couple of birthdays and celebrated Halloween, and we started packing for the move. All the while we remained anxious that the deal could still fall through prior to closing. Then, we had to prepare the kid to part with his newly found friends, which was exactly why we were pushing to have him start kindergarten in the school district where we would be moving. There was a bit of sadness on the kid’s part and a lot of guilt on mine. But I remembered splitting my own kindergarten year between two schools and took comfort in the possibility that like me, he, too, would survive.

Early in November, we closed on our first home. Though it was a stressful time with everything that had to be done before the end of our lease, there was also immense relief. I was one step closer to getting what remained of my family together.
But on November 12th, I went to the Emergency Room for another health threat that wasn’t even in my radar before. Without disclosing too much, I was discharged with instructions to follow-up with a neurosurgeon and couldn’t secure an appointment until December.
My kid had his sixth birthday, and my husband had his thirty-sixth. We celebrated Thanksgiving in our new home, which also happens to be a block away from where my husband’s childhood best friend lives. Now, my husband’s childhood best friend happens to have a son the same age as ours. More of that cosmic/divine intervention stuff. Aside from this positive development, the kid made a friend in class on his first week at the new school and got himself invited to a birthday party.

We still have an intimidating quantity of boxes and bags to unload. But we’ve emptied our old place of stuff. And yeah, I’m still sick in the head and parts of my body, and yeah, my writing juices could still use more unblocking, and yeah, I’m still carrying all this luggage of loss and grief and guilt. But hey, this is also me, doing my best to move on without forgetting—to see and appreciate more sunrises, one wonderfully trudging day at a time.